Participationism and the Limits of Collaboration Participationism and the Limits of Collaboration

Today everyone sings the praises of participation: leading academics hail active audiences who remix commercial culture, established curators wax poetic about relational aesthetics, web 2.0 executives and marketing experts applaud openness and connectivity, conservative economists have discovered the benefits of collaboration. Interactivity, access, engagement are the highest ideals of the new order, ideals taken by many to be synonymous with democracy. Participation is perceived as politics, and vice versa.

The fantasy of participation is a powerful one, postulating, as it does, the invitation and inclusion of everyone, everywhere. The Internet, we are told, makes this dream a reality, erasing borders and distinctions, smoothing out differences and hierarchies. We are all equal now, because we believe everyone’s voice can be heard. Political theorist Jodi Dean calls this “communicative capitalism,” an ideological formation that fetishizes speech, opinion, and participation.

With participation now a dominant paradigm, structuring social interaction, art, activism, the architecture of the city, and the economy, we are all integrated into participatory structures whether we want to be or not. How are artists and activists navigating the participation paradigm, mapping the limits of collaboration, and modeling participatory forms of critical engagement?

Astra Taylor is a writer and documentarian. Her films “Zizek!” and “Examined Life” screened in festivals, theaters, on television around the world. She was named one of the 25 New Faces to Watch in independent cinema by Filmmaker Magazine in 2006. Astra has also contributed to Monthly Review, Adbusters, Salon, Alternet, The Nation, Bomb Magazine and other outlets.

Jodi Dean is Professor of Political Science at Hobart and William Smith Colleges and Erasmus Professor of the Humanities in the Faculty of Philosophy at Erasmus University. Her research and writing focus on the contemporary space or possibility of politics. She is the author or editor of nine books, including Zizek’s Politics (2006), Democracy and Other Neoliberal Fantasies (2009), and Blog Theory: Feedback and Capture in the Circuits of Drive (2010).

John Hawke is an artist whose work began in landscape painting—specifically the sited-ness of plein air painting, and has developed to model the landscape not as an optical organization of colors, but as a collection of vectors of interest. He has exhibited throughout the US, as well as in Lisbon, Chichester (UK), Oslo, and Milan. He has presented his work at the New Museum, PS.1, the New School’s Vera List Center, and at the College Art Association (LA, 2009).  His current practice involves unauthorized collaborations as urban interventions. His work can be seen in the Re:Group: Beyond Models of Consensus show.

Not An Alternative is a non-profit organization with a mission to produce, support, and popularize a practice of critically engaged cultural production that integrates art, activism, technology, and theory. The group questions and leverages the tools of advertising, marketing, public relations and spectacle-making, with an aim to affect popular understandings of events, symbols, and history. They are co-curators of the show Re:Group: Beyond Models of Consensus. 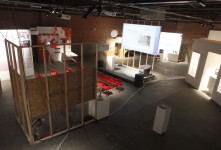 Re:Group: Beyond Models of Consensus