Mind Games & Activism: Marketing, Persuasion, and the Myth of the Hardwired Public

Please join us for a presentation by author, historian, and media/culture theorist Stuart Ewen.

The intersection of semiotics and psychoanalysis has proven fruitful terrain for PR professionals, advertisers, politicians, and other types of leaders. Over the course of a century those whose job it is to persuade the public have increasingly abandoned appeals to rationale in favor of appeals to emotion. Instead of trying to persuade with text and reason, they use imagery and symbols to appeal to instinct and emotion.

Ewen will tour us through the history of “spin”, propaganda, and the role of images in consumerism, mass psychology, politics, social movements, cultural attitudes, and consumption. PR is a battle to define reality, and how people see and understand that reality. In this presentation, we will explore what it means to do battle armed with the tools of persuasion.

And live-streamed at http://livestream.com/notanalternative for remote participants

Ewen will build on ideas from his book, PR! A Social History of Spin, and from Adam Curtis’s BBC series, “Century of the Self,” which was loosely based on that book.  Ewen will also draw on ideas from his current research for a book to be entitled The Phantom of Certitude: The Folklore of Science in Con­temporary Culture.  This new work is a critical exploration of the powerful influence of scientific fundamentalism that has been expanding for more than a century and has become a growing fixation in the wake of new genetic and neuroscientific research into the molecular biological mechanisms that allegedly shape and drive all human thought and behavior.

ABOUT STUART EWEN
Stuart Ewen is Distinguished Professor in the Department of Film & Media Studies at Hunter College, and in the Ph.D. Programs in History, Sociology and American Studies at The CUNY Graduate Center (City University of New York). He is generally considered one of the originators of the field of Media Studies, and his writings have continued to shape debates in the field. Ewen is the author of influential books on the history of consumer society, visual culture, propaganda and modernity, including PR! A Social History of Spin, All Consuming Images: On the Politics of Style in Contemporary Culture, Captains of Consciousness: Advertising and the Social Roots of the Consumer Culture and, with Elizabeth Ewen, Channels of Desire: Mass Images and the Shaping of American Consciousness, and also Typecasting: On the Arts & Sciences of Human Inequality. Under a nom de plume, Archie Bishop, he has also worked as a photographer, pamphleteer, graphic artist, multimedia prankster, and political situationist for more than thirty years. Bishop’s artwork is part of an international traveling exhibit, “Toxic Landscapes,” sponsored by the Puffin Foundation, and was featured in “Tactical Action,” a group exhibit at the Gigantic ArtSpace in 2004. 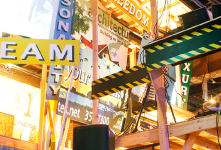