Mark Rudd: Grampa Was a Terrorist Mark Rudd: Grampa Was a Terrorist

Creative activism considers the relationship between representation and action, the material and immaterial. Contemporary activists employ traditional tactics as well as those that take into account our hyper-mediated world of signs and symbols, stories and spectacle. This fall, the Yes Lab, Not An Alternative, and the Center for Artistic Activism are teaming up to bring you Creative Activism Thursdays, a series of lectures and workshops with theorists, activists and artists from around the world.

Introduced by Jeremy Varon, author of Bringing the War Home: The Weather Underground, the Red Army Faction, and Revolutionary Violence in the Sixties and Seventies

Mark Rudd led the legendary 1968 occupation of five buildings at Columbia University, a dramatic act of protest against the university’s support for the Vietnam War. As charismatic chairman of the Columbia chapter of Students for a Democratic Society, the largest radical student organization in the United States, Rudd became a national symbol of student revolt, and went on to co-found the Weathermen faction of SDS, which helped organize the notorious Days of Rage in Chicago in 1969 before going underground. Mark will speak about the intended and unintended humor of ‘60s activism. 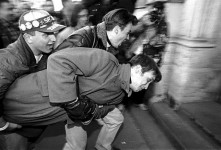