How To How To

How To How To

At last month’s Upgrade! New York gathering, writer/theorist Clay Shirky suggested that the most successful open source collaborations are those that use recipe-like methods to share information. In order to explore this idea further, this month’s discussion examines recipes, instructions, and open source collaboration. Participants include Eyebeam residents Rebecca Bray and Britta Riley, artist/writer/activist Marisa Jahn, and Billy Gordon, Instructables content producer. Presentations by all participants will be followed by a discussion and Q&A.

ABOUT THE PARTICIPANTS
Britta Riley and Rebecca Bray are artists working to create crowdsourced R&D solutions for environmental issues. Their current project, Window Farms, seeks to create a new Research & Development model which puts the awesome power of discovery and creation into the hands of the masses, and then spread the know-how to every participant. windowfarms.org/

Marisa Jahn is an artist/writer/activist whose work explores, constructs, and intervenes systems. In 2009, she co-founded /REV/-, a non-profit organization that fosters socially-engaged art, design, and pedagogy. Jahn is also the co-editor of ‘Recipes for an Encounter’ (Western Front, 2009). Through an interdisciplinary lens that brings together art, architecture, literature, and political science, “Recipes for an Encounter” explores the anticipatory nature of recipes together with their promise of what will unfold, take place, be consumed.
www.marisajahn.com

As a former community manager and content producer for Instructables, Billy Gordon worked on various projects, such as building a giant 8 foot scale replica of a kitchen match and branding himself with an industrial cutting/engraving laser. His projects have been published in Make Magazine and PC Magazine.com, which named his Lego USB charger one of “The 10 Coolest Lego Inspired Gadgets”.www.instructables.com/member/Tetranitrate/ 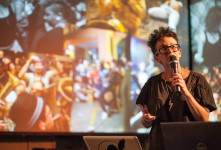