The Natural History Museum is a new museum that offers exhibitions, expeditions, educational workshops and public programming. Unlike traditional natural museums, it makes a point to include and highlight the social and political forces that shape nature.

The Natural History Museum will have its grand opening at the Queens Museum, September 13th – October 4th. A series of panels, workshops, and performances with artists, activists, scientists, anthropologists, historians, and theorists will introduce the public to the historical and theoretical framework that informs The Natural History Museum’s programs. Presenters include authors Christian Parenti and Astra Taylor, artists Mark Dion and Liberate Tate, scientist Michael Mann, historian Stuart Ewen, media/political theorist Jodi Dean, activists Eddie Bautista and Elizabeth Yeampierre, and others. In tandem with the opening will be the launch of The Natural History Museum’s online museum, and mobile museum—a 15-passenger tour, expedition, and action bus.

The museum’s inaugural exhibition is timed to coincide with the People’s Climate March in NYC on September 21st, anticipated to be the world’s largest climate march in history. UN Secretary General Ban Ki Moon will host an emergency summit on the climate crisis with world leaders that week in New York City.

PLEASE JOIN US FOR THE MUSEUM’S OPENING EVENT ON SEPTEMBER 13. 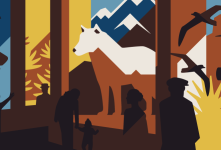